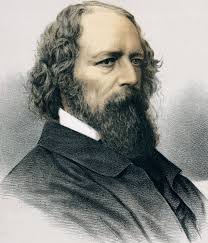 Alfred Tennyson, 1st Baron Tennyson (August 6, 1809 - October 6, 1892) was a British poet. He was a poet and laureate of Great Britain and Ireland during most of Queen Victoria's reign and remains one of the most popular British poets. In 1829, Tennyson was awarded the Chancellor's Gold Medal in Cambridge for one of his first plays, Timbuktu. In 1830, he published his first solo collection of poems, "Poems are mainly lyrical." Clarabelle and Mariana, which remain one of Tennyson's most famous poems, were included in this volume. Despite the fact that some critics considered him overly sentimental, his poem soon became popular and attracted Tennyson's attention to famous writers of the time, including Samuel Taylor Coleridge. Tennyson's early poetry, with its Middle Ages and powerful visual images, had a great influence on the Pre-Raphaelite Brotherhood. Tennyson also excelled at writing short texts such as “Break, Break, Break”, “Light Brigade Charge”, “Tears, Empty Tears” and “Crossing the Bar”. Most of his poem was based on classic mythological themes such as Ulysses, although In Memoriam A.H.H. was written in memory of his friend Arthur Hallam, a colleague poet and student at Trinity College in Cambridge after he died of a stroke at the age of 22. Tennyson also wrote several notable empty poems, including the King’s idylls, Ulysses, and Tipton. During his career, Tennyson tried to play drama, but his plays enjoyed little success. A number of phrases from Tennyson’s works have become commonplace in the English language, including “Nature red in teeth and claws” (In Memoriam AHH), “Better to love and lose / Never love again”, “Not to reason why / / They must do and die ”,“ My strength is like the power of ten, / “Because my heart is pure”, “Strive, seek, find and not give in”, “Knowledge comes, but wisdom lingers” and “The old order changes giving way to a new one. ” He is the ninth most quoted author in the Oxford Quotation Dictionary.

The Holy Grail and other poems Alfred Lord Tennyson
$14.99

The Princess of Alfred Tennyson. Re-cast as... Alfred Lord Tennyson
$11.99

A selection from the works of Alfred Tennys... Alfred Lord Tennyson
$15.99

Tennyson for the Young. With Introduction a... Alfred Lord Tennyson
$12.99