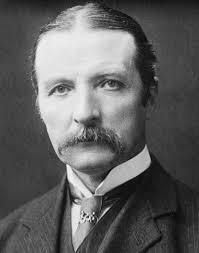 William Archer (September 23, 1856 - December 27, 1924) was a Scottish writer and theater critic who spent most of his career in London. He was an early supporter of the plays of Henrik Ibsen and was an early friend and supporter of Bernard Shaw. Archer was born in Perth, the oldest of nine children of Thomas Archer and his wife Grace, nee Morrison. Thomas often moved from place to place in search of work, and William attended schools in Perth, Leamington, Reygeit, and Edinburgh. He spent part of his childhood with relatives in Norway, where he was fluent in Norwegian and got acquainted with the works of Henryk Ibsen. Archer won a scholarship to the University of Edinburgh to study English literature, moral and natural philosophy, and mathematics. When the family moved to Australia in 1872, he remained in Scotland as a student. While still at university, he became the lead author of Edinburgh Evening News in 1875, and after a year of visiting his family in Australia, he returned to Edinburgh. In 1878, in accordance with the wishes of his father, he moved to London to train as a lawyer. He was not interested in the law and so far has taken a great interest in theater, but he entered the Middle Temple and was called to the bar in 1883: he never studied. He supported himself by working as a dramatic critic of The London Figaro, and after he completed his law degree, he moved to Mir, where he remained from 1884 to 1906. In London, he soon took a prominent literary place and had a great influence. Archer played an important role in introducing Ibsen to the English public, starting with his translation of The Pillars of Society, created at the Gatey Theater in 1880. This was Ibsen's first play, which was staged in London but made little impression. He also translated, alone or in collaboration, other works of the Scandinavian scene: Ibsen's “Doll House” (1889), “Master Builder” (1893, with Edmund Gosse); The "Visit" of Edward Brandes (1892); Per Gunt Ibsen (1892, with Charles Archer); Little Eyolf (1895); and John Gabriel Borkman (1897); and he edited the prose of Ibsen, 1890-1891).

The Pillars of Society: A Play in Four Acts Henrik Ibsen
William Archer...
$12.99

About the Theatre: Essays and Studies William Archer
$17.99