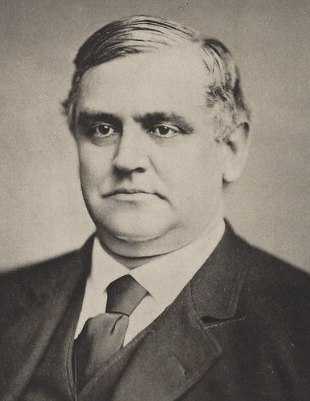 Phillips Brooks (December 13, 1835 - January 23, 1893) was an American Episcopal clergyman and author, long the Rector of Boston's Trinity Church and briefly Bishop of Massachusetts, and particularly remembered as lyricist of the Christmas hymn, "O Little Town of Bethlehem". In the Episcopal liturgical calendar he is remembered on January 23. Born in Boston, Brooks was descended through his father, William Gray Brooks, from the Rev. John Cotton; through his mother, Mary Ann Phillips, he was a great-grandson of Samuel Phillips, Jr., founder of Phillips Academy (Andover, Massachusetts). Three of Brooks' five brothers - Frederic, Arthur and John Cotton - were eventually ordained in the Episcopal Church. Phillips Brooks prepared for college at the Boston Latin School and graduated from Harvard University in 1855 at the age of 20, where he was elected to the A.D. Club. He worked briefly as a school teacher at Boston Latin, but, upon being fired, felt that he had failed miserably. He wrote, "I do not know what will become of me and I do not care much.… I wish I were fifteen years old again. I believe I might become a stunning man: but somehow or other I do not seem in the way to come to much now." In 1856 he began to study for ordination in the Episcopal Church in the Virginia Theological Seminary at Alexandria, Virginia. While a seminarian there, he preached at Sharon Chapel (now All Saints Episcopal Church, Sharon Chapel) in nearby Fairfax County.Phillips Brooks (December 13, 1835 - January 23, 1893) was an American Episcopal clergyman and author.

The Oldest School in America. An Oration an... Phillips Brooks
Robert Grant...
$12.50

Perennials: Selections from the Writings of... Phillips Brooks
$13.50

The influence of Jesus. The Bohlen Lectures... Phillips Brooks
$15.99

Lectures on Preaching: Delivered Before the... Phillips Brooks
$16.50