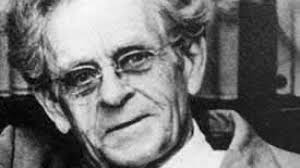 John Gneisenau Neihardt (1881 to 1973) was a US author and poet, as well as an amateur historian and ethnographer. Neihardt, who was born durung the final pedriod of the settlement of the American Plains, he developed an interest in the lives of those who comprised the European-American migration, as well as the lives of the Indigenous peoples that were displaced. Black Elk Speaks (1932) was his best known work in which he develops an extensive narration of the visions of a Lakota medicine man called Black Elk. It was translated into German in 1953 as Ich Rufe mein Volk (I Call My People) (1953) and was reprinted in 1961, at the beginning of rising interest in Native American cultures. Its popularity led to four other editions, and in 2008 the State University of New York published the book in a special, annotated edition.